Hearing that your parent has Parkinson’s disease isn’t so bad when you’re expecting something much worse. That was honestly the way I felt the day that my mother, Sue Quinn, finally came home with a diagnosis for what had been causing all of her strange disconnected symptoms. Oh! It’s just Parkinson’s! Wait, it’s 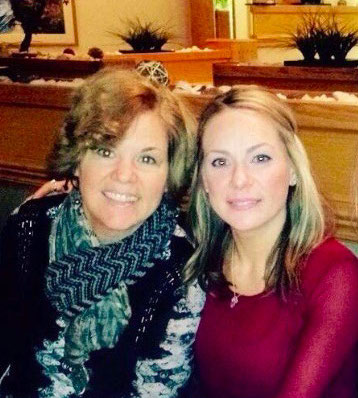 Parkinson’s? I know. Ridiculous right? But when your parent, a parent who is just 50, keeps having MRI’s and
so much radiology your mind starts going to dark places like, it must be terminal brain cancer. At least mine went there.

For a long time, it felt like the doctors were playing whack a mole. A new symptom would pop up! Bam! Where did that come from? Weakness in her arm, forgetfulness, a dragging foot. While her doctors were trying to figure it out, for a time, her condition became more about a process of elimination. Mom downplayed everything. But I knew she was hiding that she was really worried, she just wouldn’t tell me or my brother and sister. I’m 34 now and was 27 at the time. As the oldest of the three, I felt somehow a little more tuned in to what was happening or what the responsibility will be.

It was a movement neurologist that figured out it was Parkinson’s. When they came home from the appointment, they announced we were having a family meeting. Oh my God, that scared me to death, here it comes. That’s why I actually felt relief at that moment. Mom was clearly in shock. Parkinson’s is progressive. Still, I immediately felt hopeful. She doesn’t take anything lying down, and this wouldn’t be any different. She would fight this with everything, and although she hadn’t processed it yet, I did experience some relief.

My mom always has been somewhat of a dynamo, very sure of herself, a total get it done person. And we’ve always gone to her for everything. The dynamic has changed some. Now I can help her. I don’t think that has been easy for someone who has never been that way. When her meds wear off, her hands get stiff and in a cup shape, and she can get tremors. Sometimes her foot drags.

I’ve seen some things in her life change. My mom and brother came to visit me in Florida while mom was trying a new medicine, and she was unwilling to go on the beach. She loves the beach! I realized that walking on the sand would be difficult for her, so she stayed in the park; that’s what made her comfortable. She left dish soap in the fridge – but we don’t make a big deal about things like that. But when she lost her day planner, it was devastating for her. It was one of the few times I’d seen her that upset. I felt like losing that was almost like a metaphor for the loss of control she feels over her body sometimes.

There are definitely humorous moments too! My mom was always anti-marijuana – zero tolerance for drugs. So, for me, it’s comical to see her tout the benefits of the plant! Now she is a card-carrying medical marijuana user. Parkinson’s and medicine have changed her perspective on that.

It’s amazing to see how well the medicines work for her overall, and it very obvious when they wear off. I am thankful that there are options to help, and she pushes through and takes advantage of every opportunity.

I also want to take this rare public space to say…Mom, I am so proud of you. You are an exemplary human; you fight for yourself and for your family. You charge ahead, never get stuck in a dark place, you keep pushing forward, you make me very proud.

Editor’s note: A patient offers advice on ways to support a parent or loved one with Parkinson’s Disease*

Bring Your Own Towel